skip to main | skip to sidebar

What Makes a Mountain Ranked? 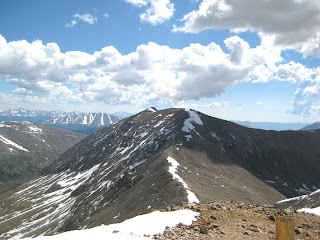 In the world of Mountain Climbing or 'Peak Bagging' there has been much discussion and disagreement about what separates a true Peak from a false summit. You can find lists of fourteeners ranging from 52 to 55 true fourteeners in Colorado. I have even seen some list 59 14ers. The most widely accepted rule for whether a peak is ranked or unranked is the "300-foot" rule.

For example the saddle between Cameron and Lincoln drops only 157 feet below the summit of Cameron. Since Lincoln is the taller of the two peaks, Lincoln is a ranked peak but Cameron is technically unranked.

Most people accept that Cameron is unranked because it is just an easy stroll from Lincoln. However, El Diente's saddle with Mt. Wilson is only 259 feet below El Diente's summit and many people add it to their list even though it doesn't meet the 300 foot rule. The jagged rocky traverse to El Diente's summit is not easy and most people who climb it feel as though they have climbed a separate peak.

In my personal opinion, I think it is all about the experience and not about the list. I say climb them all. If it looks like something you want to climb, do it. I don't know anyone who has climbed El Diente and regretted it or wished they hadn't done it. I use the 300 foot rule because it has been around for a long time and although I've never determined why the round number of 300 was chosen, it seems to work well for Colorado's Peaks.

So following the 300 foot rule I list 53 official ranked peaks. Have I climbed some of the unranked peaks? Absolutely. Sometimes you have to leave the list behind and explore other fun hikes and climbs.
Posted by Kids Loving Nature at 11:19 AM

Kids Loving Nature
I am the father of two daughters. My wife and I are raising our children in Northern Colorado where we love to hike, snowshoe, camp, snowboard, splash in rivers, and play in mud. We also own and operate the retail store Hip Mountain Mama where we sell sustainable and natural products.